Alice Cooper - Pretties For You 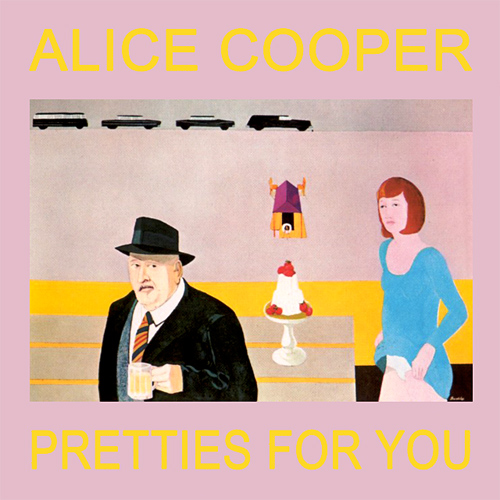 Every band starts somewhere, and in the Sixties you could get signed to a label with the intensions of being able to grow. Someone would see something in a band that could be nurtured, and in many cases exploited. In the case of Alice Cooper, it was Frank Zappa and the label that allowed the original Alice Cooper Group to take root and grow.

Let me be clear about two things with this album. It is an album for those that consider themselves true Alice Cooper fans, or for people that are a fan of sixties Experimental Rock. This is like listening to early Pink Floyd, or the Beatles' raw demos from the psychedelic period, or early Frank Zappa even. This is just one of those kind of albums.

Titanic Overture opens the album up with a keyboard/organ number that is pretty cool. It's creepy, ominous, haunting, and has just the right amount of chill to it. It then moves into a piano piece that fades out.

It starts getting all weird and experimental and Noise Rock on 10 Minutes Before The Worms. This is totally for a certain kind of person. On the experimental noise side of things, it's pretty cool.

Sing Low, Sweet Cheerio is musically cool. It's hard to believe that it's the same band as the last track. If you can get over the sounds of the prodution which suffers in part due to when it was recorded, it's a really decent track. Also, to be honest the vocalist which was then listed as Vincent Furnier sounds kind of shitty. But seriously, musically this is really damn sound. What stands out to me the most in this song is Neil Smith's drumming. I would love to have heard it recorded with the amount of tracks available today.

The rawness of Today Muller is what holds this song back. It's a song that was way ahead of it's time and would be a great starting point for a band to expand on in this day and age.

Living is the first song on the album that the average listener could get into. This could have easily been a radio single. This is a track I would have expected from The Monkees, middle era Beatles, many of the West Coast psychedelic bands, but really well done.

Fields Of Regret is another song that suffers from not having the time of being further developed, or having better recording equipment. This is one of those tracks that could have been a huge favourite of the underground circuit if it had had the chance to be produced the same as Black Juju, which came out only two years later. However, one could argue that Black Juju pretty much was this song rearranged.

There was an Alice Cooper song I saw a very early promo video for, and I spent forever trying to find it. Eventually I came across Levity Ball (Live at the Cheetah) on this album and I couldn't understand why the studio version wasn't used. I still don't get why a proper version of this song wasn't released. I heard a demo that made me understand a little, but it pisses me off because there's a version on an unofficial release called Live At The Whiskey A-Go-Go which is fantastic. But instead, this album has some piss poor live recording. It really bugs me because this song is awesome. I love the lyrics even. So much poetry. "I got my invitation to the annual levity ball / Seeing the location is within the mirrored room / Walking in my room I found I had nothing to find / I got into my evening wear and left my clothes behind / I sat down on the stairway seven hours at a time / Writing all of this poetry that I knewq would never rhyme / The memory I knew I must have had when I came in / Was of some varied places where I've never ever been / And then in came a cake all decorated in my name / With four paper brown candles are all spelling out this name / The clock was passing out from time to time I saw it all / The beginning of the ending of my first levity ball".

I'm in the middle with B.B. On Mars. It's one of those early sounding songs that should have stayed that way, but on the other hand it does seem well developed. It's a song for those that like it raw.

If you read my review for Billion Dollar Babies you will already know the future story of Reflected, and how it would evolve into one of the great songs of the seventies, it started off here in rough and raw style. I honestly still really dig this track, and would have loved to have heard a version of it fully remastered to the fullest degree.

Apple Bush is a little too Rainbows and Unicorns kind of Hippy Rock for me. I mean this track is interesting, but not my cup of tea.

Earwigs To Eternity is a song that suffers from a lack of proper development. I think if it had been put into the hands of Bob Ezrin for a little time it could have become something a little more interesting. I can't really suggest this one to anyone other than the fans.

Okay, it's clear with Changing Arranging that the band understood from day one that an album needs to be closed out just right, and if it's hard and heavy that's all that much better. I really wish Dennis Dunaway's bass was pushed further ahead in the mix, and the drums were mic'd better, but it would have given this song a fuller sound that would have been killer. This is a track that Bob should have pushed to redo with the band later.

All in all this album is actully pretty decent for it's time. I really think some of these songs should have been given a second life in Bob Ezrin's producer hands later on. Maybe as a bonus album to the original Greatest Hits album, if it could have been done.