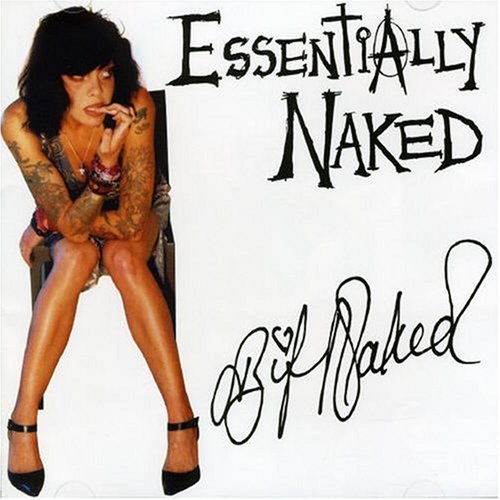 I like when there are bands I feel I need to defend against my friends' smart mouthed, shit brained, comments. Some times it's a challenge, how does one honestly defend Styx? I have my ways, but they aren't always pretty. Then there are times when I find myself defending artists who's music I don't even like, such as Lady Gaga. However, one of my favourites to defend is Bif Naked, the first Goth artist I honestly knew, and she is Canadian to boot.

Okay, she wasn't the first Goth artist/Band I knew. I was into Type O Negative a few years before I first saw Lucky (1998), and I knew a few other bands like My Dying Bride as well. However, Bif was the one getting the video play on Much Music, so I'm going to stick with the Canadian bad girl.

Now, here's the catch to Bif Naked, she is not only Goth. She started out that way for sure, but it was more of a Girly Goth. Think black unicorns with silver horns, and high end silk and lace dresses. You can even include the cliche poetry writing. The thing is, that's just how she started off in the popular mainstream of music video mania. She, in fact, was a Grunge artist in the early days, and a bad ass Punk Rocker at the turn of the millenium. But she also understood the remix world as well. On top of all this she also does the ditzy blonde thing too.

The album opens with Rich And Filthy which was from 2003, and I believe one of two new songs recorded specifically for this collection. The easiest way to describe this song is The Sex Pistols meet The Runaways. It's Pop sounding, only because it's played by refined musicians, and sung by a girl, that sounds like a girl, but it's totally Punk in it's core.

After that comes Back In The Day, which is the other new track. This is a fun retrospective kind of song. The days when they were still struggling and dreaming, instead of being a major hit band. It's the romantacism of the glory days, when it was all still just a dream.

I fell in love with Bif Naked's music when I first heard I Love Myself Today. It has a great beat, it's all kinds of sexy purring mixed with a whole lot of fuck you attitude, and the guitars are simple by most standards, but they really kick some ass. Basically, I would say this is totally channelling The Rolling Stones, when it was worth channeling them.

After that it's on to Spaceman, which was the second song I knew from Bif. I wasn't impressed back then, and I'm still not impressed. The song is a little too Dance Club for me. Imagine Madonna doing Like A Prayer in her Lucky Star days, and I think that's a fair description. This isn't my cup of tea, but I get why so many people dig it.

I remember when the video for Lucky came out, and I had no use for it. It was just too slow and pretty for me at the time. Now a days I dig the song much more. For me the fun part is that my daughter found this song all on her own, due to watching Buffy The Vampire Slayer. It's really one of those songs that I think should span the generations. Although it's still a little too pretty for my liking.

Then it's on to the real old days. Daddy's Getting Married is from 1994 and is so Canadian Grunge it's almost surreal. It's like listening to the Crash Test Dummies with a pretty girl voice singing. There's a total innocence in the tantrum behind this song. But it's sweet and cute, and totally explains why Bif (the singer) is the way she is.

Moment of Weakness is a really quick Canadian Punkish song. The problem Bif Naked has with all their music is that it always sounds practiced and polished, so it lends to a commercial sound, even though it's not. I mean this song sounds very much like a No Doubt tune, but the truth is you can feel that it's not staged bullshit that Gwen Stefani sells. This is a real spoiled little bitch, but she can kick your ass if she has to.

I give props to Bif for including some of her spoken word pieces on this collection. I even dig her My Satan Poem, but this is not for most people. Good on Bif for trying to expand peoples horizons. Also I like "Satan shows up on my TV every Sunday morning."

I've just recently debated the coolness of Tango Shoes with Robson, and he was all spitting on this song. Then I looked him straight in the face and said "Dude, it's tango as in to kick someones ass, not tango as in fancy dancing." People just can't get past the girly demeanor. They don't realise she's Betty Boop as a biker bitch. My Whole Life is from 1994, the same time as My Satan Poem, and Daddy's Getting Married, but this sounds totally inspired by Frozen from Madonna's Ray Of Light. Except that song came out at the end of the 90's. Like I said before this woman is diverse. I also like that she is able to tap into so many different styles and genres all at the same time.

Chotee is the name of some dude that left her, or something along those lines. But it's a really well written and performed song. I totally love that it takes you on an adventure, as well as get's all kinds of angry pissed off mayhem going on. Bif Naked understands Rock, and all should recognise and show some respect.

It's back to the Grunge days with My Bike. The music is everything you would expect to hear from that type of sound. There's a drone, guitars that sound sloppily tuned, and overly fuzzed, and overly poetic lyrics. Pretty much it was the same recipe used by Hole on the Malibu album, but with the honesty of Live Through This.

No Me Drink is another poem, that's quick and cool. But only if you are into that kind of stuff.

I love Twitch. Bif captures the playful good girl gone bad so well. This song continues to emphasize the band Rock genius. These people can play their asses off. The bassist understands what a bassist is supposed to do, the drummer knows their job, and the guitarists are the same.

Choking On The Truth is just more awesome rock as far as I'm concerned. Anyone bashing on this song clearly is a neadrathral that can't get past the fact that girls know how to rock too. Does Bif (the singer) sound anything like Ann Wilson of Heart? Hell no! But that doesn't mean she doesn't know how to rock that mic. It's like the Ramones with better musicianship.

Eine Tasse Tea sounds like a Slam Poetry piece to me, or at least based on my limited exposure to Slam. The only exception being that the piece runs 4:00. To be honest with you, I skip this track most of the time. It's a bit cliche to me, but that's once again based on my poetry exposure.

It's totally back to the Grunge for Everything, but it's only Grunge in tone. The spirit of the song is more Blondie.

Then the album ends with Tell On You, which is from the exact same time as Everything and every other track from 1994, and this is totally the song that Evanescence ripped off to do My Immortal, or whatever that silly piano song was. The only thing is that Bif Naked's Tell On You is a million times better, and much more beautiful because it's raw and honest. You can almost hear it being recorded live off the floor.

Okay I sort of lied about the album ending. There are three more tracks, but they are all remixes. The first one is Spaceman, and it's like they stole a techno line from Trainspotting, and laid Bif's vocals over top of it. I'm sure some people will like it, and I'm sure they are also very, very, gay, and are currently listening to techno in clubs, hopped up on E, as we speak. Also there is nothing wrong with that, I just don't want a single thing to do with it. I really do dislike the music very much.

Then it's on to the remix for Lucky. I can accept this much more than the last. The tones and pulses that give it life are more fitting to the song, and don't give me headaches, as quickly. To be honest I hate computer generated music, because I believe in the soul of a band. That being said, I've done this shit with my own poetry on my home computer for my own enjoyment, but mainly for the lack of a band. Then the album officially ends with a remix of I Love Myself Today. It sounds like it was redone for one of the Mission Impossible movies. I think it really is a bit insulting to the original.

If not for the silly remixes I would score this album higher than I do. They leave a bit of a sour taste in my mouth. However, I stand by the fact that it only shows how diverse of an artist Bif really is. This album spans the course of Nine years, and you can hear three different distinct decades of music. The reality is that this album represents an artist that was constantly out of time, because she was either too ahead of everyone or just a little behind. It's the curse and beauty of being a Canadian artist. Well, until being a Canadian musician became the "in" thing.