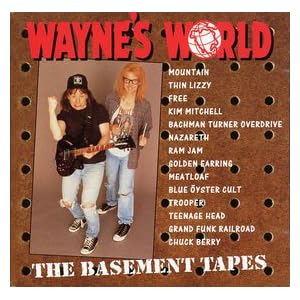 There are some songs that you really love, but have no clue where the song originally came from, or who is performing. Or maybe that band was a one hit wonder and you don't want to go out and buy a whole album of steaming turd for one song. I picked up Wayne's World The Basement Tapes when I was in high school, but after both movies had come out, and Mike Meyer and Dana Carvey were both long gone from Saturday Night Live. However, they had nothing to do with this album. Not even the song selection from what I can tell.

This album contains some of the greatest Rock songs to just have a good time to. That is the best way to describe this album the whole way around. It's a good times album.

The album opens with Mountain's Mississippi Queen. This was the first reason I bought this CD. I love this song, but the band was more or less a one hit wonder, and I never wanted to pick up anything else from them. I probably should and would now, but back then I wouldn't have.

Thin Lizzy's The Boys Are Back in Town is next. This song is everywhere. I own at least three separate CD's, one of which is actually a Thin Lizzy album, and unless the album is just playing through or I'm not paying close attention I tend to skip this one now a days. I've just heard it too much, and Thin Lizzy have so many better songs.

All Right Now, is the second reason I picked up this disc. This has been a favourite of mine since I was a wee lad. I don't know where I first heard this song, but it was most likely on WRIF, WLLZ or WCSX. I mean this song just makes me feel three kinds of awesome and at ease with the world, and that's a pretty nifty thing for me, since I generally hate the world.

I love that there's just a little CanCom on this CD, and they put it all together. First there's Kim Mitchell's I Am A Wild Party, and as much as I don't mind this song, I will admit it's a bit cheesey. However, if you listen to the song and really pay attention, you'll see the music and production are actually really cool, and worth a more attentive listen.

After that is Bachman Turner Overdrive's You Ain't Seen Nothing Yet. I don't like this song. It's a really good, solid song, but I just don't care for it. I find it's been over played, and over rated. But to be honest I'm not much of a BTO fan. I would have prefered that Takin' Care Of Business had been on here instead, even though I know it's even more commercial and over played.

I really like Nazareth. They are one of those bands that I think I'm going to have to go back and buy more than just a greatest hits from. I mean these guys are amazingly talented music writers. They only have one song I don't like and that's Love Hurts, which is not on here thankfully. Instead we get This Flight Tonight. This is just a wicked song. I love everything about it, including the rough, Brian Johnson-esque vocals.

Black Betty is one of those songs that's stupidly simple, and it makes it that much cooler. The best songs are never the complicated songs, it's always the simple songs that make the best Rock songs. However, that's not even the best part about this song. The best part is the fact that the song is pretty much a four minute song, with three minutes of kick ass jamming.

I feel I should mention that there are three songs in a row that suck up almost a third of this album on their own. The first was Radar Love, clocking in at 6:24, then Paradise By The Dashboard Light at 8:24, and finally Don't Fear The Reaper at 5:05. All of which are fantastic songs, no matter how much some people may complain about the length of the songs.

Meatloaf's Paradise is one of the best Duets ever recorded. Not only does it border on musical genius, but the production is astounding. My only complaint is I find the "Let me sleep on it part" runs a bit longer than I care for. However, the performance value to this song is through the roof. It's one of those songs that I'm a bit bummed I've never been able to at least Karaoke. Not enough women know this song in this day and age I find, and that's sad, because they might learn something. Like don't use sex to try and trap a man.

If it were not for one more song on this album, I would stop it after BOC's classic. I don't care for two out of the last four songs, and one of the two I like is just way too much of a joke song to ever take too seriously.

Let me start with Trooper's Raise A Little Hell. Which, is a good song in it's own right, but to me it's a skipper. I also feel the same way about Teenage Head's Let's Shake, but I wouldn't say it's good. It's an okay New Wave/Punk hybrid sounding song, but not as good as the bands that perfected that sound, like Blondie, Devo, or The Talking Heads.

The album finishes with Chuck Berry's My Ding-A-Ling, which is a giant, fun, overkill, innuendo. It's great for a laugh and it makes me smile everytime. However, I don't generally bother to listen to it, unless it's just playing on the CD player. Back when I didn't own more than a five disc CD player, I normally never made it to My Ding-A-Ling because I stopped the CD after track thirteen, which is Grand Funk Railroad's version of The Loco-motion, which is pretty much like any other version you've ever heard, except it's by Grand Funk Railroad. I've DJ'ed a few events in my time, and I've busted this song out everytime, and the reaction is always one of true excitement. This version is just so lively, and energetic. Not to mention it sounds like a real rock song, instead of Girl Pop, like the other two more popular versions.

If you ever come across this CD, I suggest you pick it up. That is unless you own these songs on other albums. However, this disc is just about the best mix of greatest, yet sometimes overlooked, classic rock songs I have ever come across. Even if all of the songs don't tickle my fancy.